Will The Winning Streak Continue For Madam Shazam 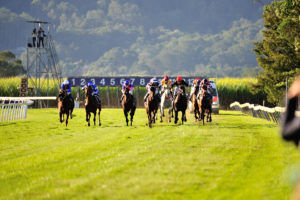 The two mares are the only females in the race full of Queensland-trained geldings.

Anne Bonny, prepared at Lismore by Owen Glue, is just one of two NSW-trained horses in the Cup field with Murwillumbah trainer Matt Dunn presenting the only other NSW-trained horse in the shape of dual Highway Handicaps winner Zamex.

Five-year-old Zamex, who won the Maclean Cup at Grafton two starts back and then ran sixth to Glitra in a record-breaking Coffs Harbour Cup, has drawn ideally in barrier one with gun apprentice Clayton Gallagher to ride.

Anne Bonny drew barrier two when Belinda Hodder rode the mare to a great win for Owen Glue last year. Tomorrow she has the same weight (54kg) and jockey but will jump from the widest barrier.

Madam Shazam, a five-year-old daughter of Sebring, has won five of her 15 starts and shoots for her fourth successive win after saluting at Coffs Harbour, Murwillumbah and the Gold Coast.

She has drawn barrier six and will have the services of in-form Ryan Maloney for Gold Coast trainer Toby Edmonds.

The former Hunter Valley trainer has had an outstanding year winning some nice races including the recent Ramornie Handicap with Melbourne bound Havasay.

Edmonds also returned to one of his old stomping grounds to win the Tamworth Cup with Plucky Girl earlier this year.

It was a nostalgic win as he had also won a previous Tamworth Cup more than a decade ago and had trained his first winner at Tamworth.

Madam Shazam is on the way up and “deserves her chance in a race like this,” Toby Edmonds said.

“I’m very happy with her.

“She’s up in grade though and it’s going to be a test but she has stepped up every time. She’s got no weight on her back (54kg) and she’s done everything right.”

Edmonds said Murwillumbah can “be a tricky track” and isn’t his most favourite track but that could change when madam Shazam steps out in the Cup tomorrow.