The Excitement Is Building For The Cup 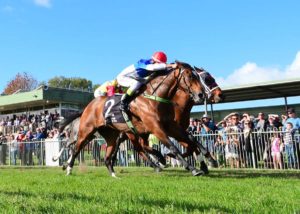 The TRJC had extended nominations on its $28,000 TURSA Newmarket and two other support races and finished with 15 nominations for the feature sprint and 139 for the eight-race meeting in total.

Club chairman, Bernie Quinn, was delighted with the late additions as his club prepares for a monster day.

“We should have a good day,” Bernie Quinn said this afternoon.

He said Country Racing chief, Brian Charman, who was a long serving board member and club secretary before heading to Sydney last year to take up his position with Country Racing, is returning “home” for the Cup meeting as well.

Bernie also believes the Cup will be one of the best as well with local interest headed by Matt Dunn’s three runners – Zamex, Mystical Renegade and Pegapus – as well as runners from leading NSW and Queensland stables.

Bodega Negra, trained by Bruce Hill, is another in with a chance and one of three entries Hill has nominated.

He has also nominated Hotel Coste and Liberty Island.

Matt Dunn’s Zamex, who won the Maclean Cup at Grafton two starts back, has been allotted 59kg.