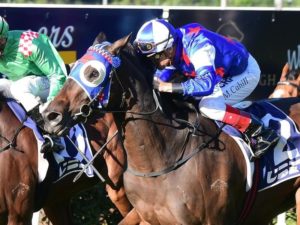 Black Type winner Morendi will resume hostilities with a First up assignment on his home track Murwillumbah on Sunday the 29th December.

Morendi the Stable Champion for the Graham Racing team was a lucky purchase for Trainer Darren Graham who came across him at a Patinack Farm dispersal sale. The fall of the Auctioneer’s hammer saw the Onemorenomore prodigy on his way to Murwillumbah for under $10,000.  The investment proved to be a sound one with the now 7 year old Gelding to date accumulating $485,150 at 19.6% winning Strike rate.

Morendi will require all his race experience to overcome what many would consider a tough assignment in the Ballina Cup Prelude (1530m) teaming up with Ryan Plumb at 64Kg and starting from what the locals would consider Cane Road, Gate 12 of 12 in his first appearance at Murwillumbah since a disappointing 5th over the same distance in January 2017.

The Graham Runner will have plenty of competition with a stacked field all vying to be exempt from Ballot for the 2020 Ballina Cup. The Wendy Bannerot Yard enter a proven group performer in Sadlers Lake, The reigning Murwillumbah Cup Champion Boncosta will be out to strike again for Team Bellamy and Premiership Leader Matthew Dunn saddles up Saxton Rock who as a two year old lined up in a Magic Millions Two Year Old Classic.

The Meeting will not only showcase a high quality exhibition of horse flesh however, with some of Country NSW Premier Jockeys including Ben Looker, Matt McGuren, Luke Rolls and Jasen Watkins being joined by their Brisbane Metropolitan Colleagues Robbie Fradd, Andrew Mallyon and Mark DuPlesis as well as two time Irish Apprentice Champion Oisin Orr who will be on a hit and run mission from Sydney for Chris Waller’s first outing to the scenic Murwillumbah Track.

An action packed 8 race card kicks off at 1:25pm with the feature the O’Brien Plumbing Ballina Cup Prelude setting off at 5:10pm. Full Bar, Tote and Bookmaker facilities will be in operation as well as Band Jefferson lane from 4pm.