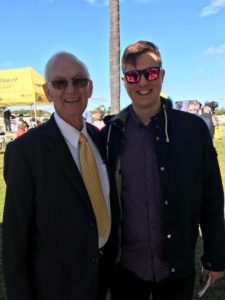 After 30 years, nine of them at the Clarence River Jockey Club in Grafton and the last 21 as the NRRA judge, the popular racing official is calling it quits.

About to turn 71 he has had a long and exact career.

“It was quite incredible,” he said of that deadheat between Future Event and Zamex in such a major Cup race.

“I knew it was tight from the naked eye.”

That deadheat reminded him of a few similar results but also fuelled some regrets about retiring.

“I would have loved to judge a triple deadheat or a quadruple,” he said.

“The closest might have been at Ballina one day, where I had a dead heat by a nose. At Grafton recently it was a nose by a shot half head.

“I came close to a triple deadheat five times I think, one of them was at Murwillumbah one day when the margin was a nose by a nose.”

For John the art of judging was about being prepared and being able to forget.

“You have to make sure your ready, got to expect the unexpected,” he said.

You have to “lock in” all the horses running in the next race but, then, when that race is over start again on the next.

When asked some days what had won the first race he couldn’t tell people because he was studying the horses and colours in the next.

Sometimes you might have a 16-horse race and it might take you two minutes to lock them in,” he said.

“Then you might have eight in the next and it takes you a lot longer. It can get very intense. But you have t be able to switch on and off too.”

That’s how many races he might have (approximately) adjudicated on.

It has also been part of a juggling act for John.

While judging at the races he also had part time permanent jobs as a personal carer in a nursing home and a maintenance man at two local schools.

Organising all three was a constant task so he could also pen poetry in spare time as well.

One of those poems was about Takeover Target the equine superstar who was bought for $1400 by a Queanbeyan taxi driver, Joe Janiak, and became a brilliant sprinter winning Group 1s in Australia and England.

“Amazing, a remarkable horse and story. I wrote a poem about him after he won the Ramornie. Started with nine verses but Joe said there is more to come yet. I ended up with 36 verses!”

For John the judging has been a wonderful time.

“I’ve been very fortunate,” he said.

“It’s an intense job and challenging. I’ve worked with some great racecallers over the years too. I’ve been lucky I’ve been able to mentally prepare for each race. I prepared the same for a Ramornie as I did for a maiden at Tabulam.”

As he said: “Expect the unexpected”.