Dunn Steps Up For A Trifecta 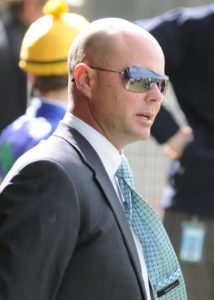 MATT Dunn improved on his first race quinella at Murwillumbah today by going one better in the second.

It was an outstanding start to the Cup meeting and while Dunn was disappointed with Rock “N” Roll Music’s final 200m he was delighted with the debut of Pirlo.

A three-year-old son of Pierro, Pirlo, bred by well known breeder Bob Wood of Oakwood Farm is now headed to the paddock.

“He’s taken a long time to mature up,” he said.

“He’ll improve on that but will go for a spell now, and get bigger and better.”

He said the six week spell will be ideal for the colt.

Rock “N” Roll Music, though, had the race at her mercy when she loomed beside her stablemate in the straight however she laid in over the final 150m costing her a maiden win.

“She was disappointing,” Matt Dunn said.

“She had a tendency to do that when she was in Sydney but hasn’t done it here until today.”

He still believes she’s a “quality mare” with a bright future.