The Murwillumbah-based trainer provided two of the favourites in the $20,000 Solo Resource Recovery Class 2 Handicap – Mother To Race Her and Vivid Pink – the latter winning the opening race on the eight-race Cup day by a short head.

The two stablemates had led from the outset and settled in for a straight-long duel that finished with Vivid Pink claiming a narrow victory in the final stride.

Matt Dunn, who had provided the trifecta in a recent Ballina race, savoured the quinella.

Vivid Pink had returned from a last start eighth in a Highway Handicap and bounced back well.

“Maybe she doesn’t like the travel,” he said of a five-year-old daughter of Sebring who has failed at two Highways in Sydney.

“She was good today.”

Mother To Race Her led all bar the final 10m of the 1530m and was chasing a second career run at her eighth start.

“They both had nice, soft runs,” Matt Dunn added.

“It was head up and head down, a good result.”

Mother To Race Her, a four-year-old daughter of Americain, “has the pedigree run further,” Matt Dunn added.

“Just got to improve her attitude.”

If she runs up to her breeding she will “get further” and improve into the bargain. 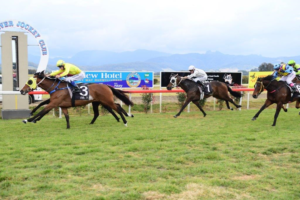 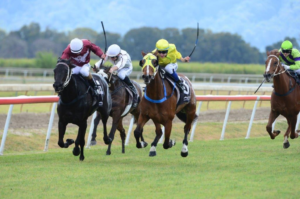