DEAD HEAT FOR THE CUP! 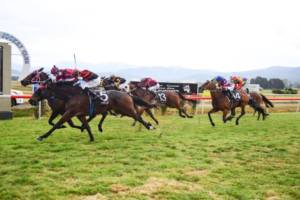 Both “winning” trainers thought they had won.

“What a peach of a ride,” John Zielke said moments after watching a slow motion replay he thought showed Future Event winning by virtue of him being on the outside.

He had, just that he had to share what was a historic moment.

Matt Dunn was as stunned as anyone.

At one stage he though his second Cup Mystical Renegade had “it won at the 300m”.

Then Zamex appeared and appeared he might have held on.

“He was unlucky in the Coffs Cup,” Matt Dunn said.

“He’s been an unlucky horse,” he said of a five-year-old gelding son of Cheval De Troy, who has also won two Highway Handicaps in Sydney.

“Just the way he races.”

He said both Zamex and Mystical Renegade will now head to Ballina for the September 6 Ballina Cup.

The former Tweed River Jockey Club committeeman and secretary was honoured with life membership and having a new decking area named after him.

“He was on the board for 13 and half years and then sec-manager for three years. And he’s doing a great job in Sydney too.”

Brian Charman is now the CEO Country Racing NSW and enjoying the many challenges that entails as well.

An accountant by trade he decided for a change in life when he applied for the secretary manager job about four years ago.

“I fell in love with it,” he said of the job and racing.