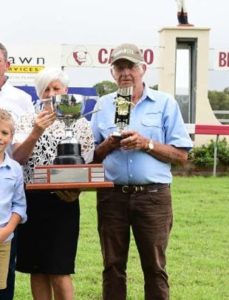 Leo Clapham, 75, celebrated the second career win of his five-year-old gelding, who surged home from second last to beat Duke Of Frederick by a half length with Conquers All a neck away third.

Crooked Gent has won just two races in his 19 starts, both of them at Murwillumbah!

“Yeah, both his wins have been here,” Leo Clapham said.

“He’s taken a while to win again.”

Leo had told jockey Jason Taylor that Crooked Gent would jump well from his wide (10) barrier but to take hold and get to the outside.

Jason Taylor did exactly that, jumping as good as anything but then going back to the tail before letting loose around the outside in the straight.

While Crooked Gent excelled on his return to Murwillumbah so did Clapham, who has been training for 54 years.

“I was born in that red brick building up on the hill,” he laughed looking up at the nearby Murwillumbah Hospital nestled in the mountains around the picturesque track.

From there he moved to Bonalbo and then to Casino where he worked for 40 years in the abattoirs.

He also trained while working in the meat works and currently has seven in horses in work at Casino.

“That’s enough for me,” he laughed.