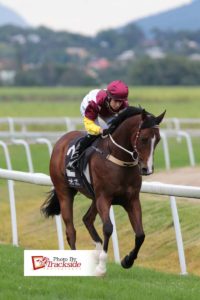 KNIGHT Templar is unbeaten at Murwillumbah and the Grafton gelding crusades to continue that winning run when he contests Tuesday’s $22,000 Jujus Open Handicap (1200m).

Prepared at Grafton by Jason Reilly the eight-year-old gelding son of Lion Heart has drawn barrier eight in the 10-horse sprint.

A winner of 10 races from 64 starts he has had just the one run at Murwillumbah winning the Xmas Sprint (1200m) at the Tweed River Jockey Club back in December.

Knight Templar has just returned from a nine week spell, he trialled twice and then finished seventh of seven runners to Hydrazine at Coffs Harbour earlier this month (October 2).

He was beaten just over four and half lengths that day but meets the winner 4kg better, Knight Templar dropping from 59.5kg to 58kg on Tuesday while Hydrazine, prepared at Ballina by Stephen Lee, goes up from 56.5kg to 59kg.

Hydrazine is an eight-year-old gelding son of Stratum with 10 wins in 59 starts.

He is a last start winner too, winning a 1000m scamper at Coffs Harbour on October 2. He has also won at Murwillumbah, twice in fact from eight starts at the TRJC course, one of which was the 2014 Newmarket. Last month he raced in the 2018 Newmarket and finished seventh to Taillevent in that 1200m feature.

He has drawn barrier five and will be ridden by James Orman in Tuesday’s Open.

He might have a stayer on his hands after Tough One ran down another Ballina gelding, Blazing Cheers (Ethan Ensby) to win today’s Helpers Drought Appeal Benchmark 66 Handicap (2375m) at Grafton.

Stephen Lee isn’t sure but thinks “he might have some staying potential”.

“He’s been going good, done a good job today,” he said after the narrow win for a Ballina quinella.

Ballina trained My Cousin Rhett, prepared by Terry McCarthy, is also a Northern Rivers Racing Association trained horse but unlike Knight Templar and Hydrazine he is yet to win at Murwillumbah.

He will go into the race as the lightweight after being allotted the 54kg minimum and Terry McCarthy booking 2kg claiming apprentice Leah Kilner to handle his six-year-old gelding.

A son of Raheeb he has won five of his 37 starts and had just the one run at the Tweed, finishing fourth there over 1530m in June last year.

He will jump from barrier six.

Gold Coast trainer Toby Edmonds, who has major success in the Northern Rivers over the past two years, runs Mystic Moon.

Edmonds won this year’s Ramornie at Grafton with Havasay as well as the recent Lismore Cup with Fairlighting.

A six-year-old daughter of Magnus, Mystic Moon has five wins from 19 starts and goes from barrier nine with Anthony Allen on board.

The Tweed River Jockey Club finished with 93 acceptors for Tuesday’s seven-race TAB meeting where five of the seven races have full fields at this stage.