Be Wined and Dined By The Chef To The Stars 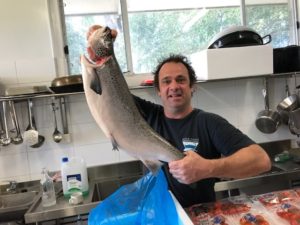 He debuted at the TRJC last year and is back again for a massive encore, said TRJC secretary manager Leanne Manning.

“We know what to expect after last year,” Leanne Manning said.

“For people who enjoy their food it’s your night. It’s going to be a big night.”

Known as the “Chef to the Stars” for catering to the likes of Madonna, Mick Jagger and Jimmy Barnes be brings more than 30 years experience in 5 Star Hotels to the TRJC.

The youngest ever sous chef at an Australasian Hyatt Hotel he’s also opened restaurants in Redondo Beach (LA) and was the chef de cuisine at the famed La Fontaine restaurant on Hayman Island.

He’s also run his own restaurant, Nosh, on the Gold Coast, a restaurant that won a Modern Australian Restaurant Award!

Leanne Manning said “just looking at the menu” is enough to stir the appetite.

The TRJC invites those interested to book seats by this Thursday (September 13) for one entertaining night of gastronomic delight.

It’s a big week or so in the Northern Rivers too with racing at Grafton on Thursday followed by the Lismore Cup a week later (Thursday, September 20). The TRJC’s next meeting is the Tallai Country Club’s October 16 meeting followed by a Melbourne Cup meeting on the first Tuesday in November.

“We’ve had great feed back from our Cup meeting,” Leanne Manning said.

“Already had reservations for our Melbourne Cup day meeting too.”

RSVP by 13th September to secretary@tweedriverjockeyclub.com.au or contact Leanne on 0408 627 573