BERNIE Patrick Quinn, OAM, has another Murwillumbah Cup meeting to preside over. 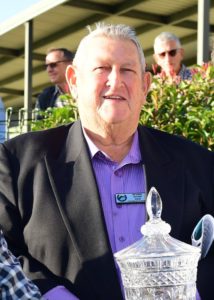 A half century of Cups is rapidly approaching for the chairman of the Tweed River Jockey Club who can count 44 under his chairmanship and 47 whilst on the board.

“I’m the longest serving chairman in Australia,” he confirms this week as he prepares for another massive Cup day on Friday week.

He and the late Pat Quan, who was chairman for 29 years until he was tragically killed in a car accident, have spearheaded the TRJC for almost 75 years!

Not bad for an aspiring car salesman.

That’s what Bernie was doing when “Charlie Bryant got in my ear and talked me into getting a horse”.

“It all went from there,” Bernie said.

“Had plenty of horses over the years too. Got six in work with Matt Dunn now. One of them goes all right too.”

That is Snow Valley, a three-year-old daughter of Snitzel, who won on debut at Lismore on Tuesday.

Matt Dunn said as much on Sky Thoroughbred Central after Tuesday’s race where he supplied the trifecta, Hayburner and Bling “N’ Bubbles filling the minor placings behind Snow Valley.

“There’s plenty of upside to her. We might give her a shot in town next start.”

He said she has a “real good attitude” and “good speed”.

Under his watch the TRJC has had a rise and fall in race meetings too.

At one stage they only raced three times a year but then had 33 at another stage.

“We were one of three clubs to first race mid week TAB meetings,” he said.

“Then we went back to 19 and then dropped a few more and now we have 11. Nine TAB and two non-TAB meetings, Melbourne Cup day and ANZAC Day.

“I think we could race 15 at least though.

“And after Friday week (Cup day) we don’t race for another six weeks.”

He thinks that should be rearranged so the club can keep some continuity of racing as it tries to build race fields and race day crowds.

Bernie received an OAM around four years ago for his many years of unpaid service to the TRJC as well as the charity work with the Flying Doctor Service.

It’s a treasured award to go with the thrill he had when he organised the great Kingston Town to “run” at Murwillumbah after he had retired.

His nephew, a jockey at the time, rode the triple Cox Plate winner and equine superstar in the showcase gallop.

He’s also proud the club will distribute more than $180,000 in prizemoney on Friday week and the many forms of entertainment the club has arranged for adults and children.

A family orientated club the TRJC has live music on the lawn with DJ Owen from 12.30pm and The Mangrove Jack Band from 4.30pm until late.

Mark Forbes, MC and sports commentator, will entertain the crowd throughout the afternoon with activities for adults and children, fashions on the field, fashion parades and live karaoke.

Buses will be operating from the Murwillumbah CBD.